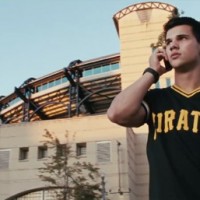 There’s something amazing about Abduction, the tween actioner from director John Singleton (Boyz N the Hood) and starring Taylor Lautner (Twilight). There’s no use going into this movie with any sort of pretense – it’s obviously going to be bad. But while many might have expected a listless recounting of standard action tropes, the film shoots sparks of intensity as it aims to go beyond merely passable – it seeks to be something incredible. My initial reaction to the film was to hail it as The Room Jr., a reference to the awkward, incomprehensible cult classic made by Tommy Wiseau. That moniker may be a bit harsh, but Abduction nevertheless impresses by featuring laughable dialogue, bizarre character interactions, jolting shifts in tone, and directing that couldn’t be more insane if it tried. If this is all a weird comedy that was marketed incorrectly, it’s genius. With nothing to suggest that that is the case, I’m forced to conclude that Singleton’s work here is only accidentally genius; so bad it’s good, so bad it’s spectacular.

The story, as it were, concerns a boy named Nathan (Lautner) who is being trained to fight by his father, like kick-you-in-the-chest fighting, and he doesn’t question it. He’s just a normal kid – an adrenaline junkie who is afraid to talk to the girl next door who has been his friend all of his life. Everything changes, though, when a class project leads him to a website which shows pictures of missing children as they would look in present day; one of the drawings looks suspiciously like him. This chance finding leads him to open a drawer which just so happens to hold the same shirt that the child is wearing in the ‘Before’ photo… because don’t we ALL keep clothing from when we were six in an easily accessible area? It’s not long before our hero is swept into a web of intrigue, a group of baddies swarming down on the house and attacking his family. As Nathan pins one guy to the ground demanding answers, the nameless henchman snarls at the kid, “There’s a bomb in the oven!” Sure enough, a peek in the oven indicates a bomb with just SIX SECONDS LEFT on the countdown timer! Uh-oh, no time to wonder how the hell a bomb got in there, RUN!!!

And so the movie continues running. It only stops long enough for Nathan and his next-door neighbor Karen (Lily Collins, The Blind Side) to occasionally get extremely close to ripping each others’ clothes off, but deciding against it. They’ve got to stay one step ahead, after all, because they’re being pursued simultaneously by a group who claims to be the CIA – yeah right! – and a Serbian assassin, played by Michael Nyqvist of The Girl with the Dragon Tattoo fame, who promises Nathan that if he doesn’t give up running, quote, “I’ll kill all of your friends on Facebook.” Was this before or after Nathan throws a man out of the window of a train, his body rigidly floating out the window? I know it had to be before Sigourney Weaver appears to provide perhaps the most quotable line in the entire film, regarding her strong feelings toward an inanimate object. Meanwhile, Karen is freaking out at the explosion at Nathan’s house, yelling that she can’t go back home because of the danger of being found out… then she’s calling her uncle to let him know she’s safe in the next scene. Yes, this is that sort of movie. It’s the kind of movie where nobody is ever abducted. It’s the kind of movie where once the bad guy is captured, the police treat the win like a game of tag. Sure, you can walk out of our custody in order to impart one final word to the hero, no problem.

And it’s all tied together by some kind of wonderful camerawork. The camera zooms in and out for no particular reason, sometimes letting a character’s head fill the entire screen without any compelling reason. In one of my favorite moments, the camera zooms in as Karen tears a photograph of two people in half, then continues to zoom in on her stomach after the photo has been ripped apart. The opening scenes where Nathan and his father practice fighting are shot like a comic book come to life, a style that only exists for this moment of the film.

It’s so difficult to write this without simply quoting lines and describing entire scenes for you. There’s a character who is set up early on as the maker of fake IDs. Hmm, that certainly won’t be a plot device later in the film, will it? No, seriously, it won’t. Or rather, he comes back to offer his services but I can’t remember the false identification ever playing a role further down the line. Everything comes to a head at a Pittsburgh Pirates game, where Karen disappears from the movie because her existence is unnecessary at this point, and where Nathan inexplicably MacGuyvers a weapon despite the heavy security at the park’s gates. And this is all after the part where Alfred Molina nods at an accomplice during an attack and both pretend to be dead by, yes, splaying out and closing their eyes – you know, like dead people do.

Listen. Here is all you need to know about Abduction:

It is an insane movie. The entire theater was there to laugh and it provided a multitude of unbelievable scenes to ensure that response. It’s going to be difficult for me not to purchase the film immediately when it arrives on DVD. It’s a drinking game and a Rifftrax waiting to happen. It joins the ranks of Wicker Man, Daredevil, The Happening, I Know Who Killed Me and the like as both comedic gem and unintentional masterpiece. There are a few remarkably well-constructed moments brought on by Maria Bello and Jason Isaacs as Nathan’s parents, both of whom didn’t receive the memo to ham it up hardcore. Not that this is a bad thing, mind you, one or two legitimately great moments in an otherwise hilariously bad movie – it’s a dream come true is what it is.

There’s your pull-quote: Abduction is a dream come true.