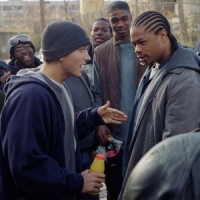 When I wrote my movie reviews on the Facebook Movies application (that time not but a distant memory), I stated definitively that I was Not Interested in seeing 8 Mile. There are plenty of movies that I had not interest in that I held a more indifferent attitude toward, not coming out to declare my disinterest, so why the animosity toward this film?

Well, the answer – the only answer I have – is that it has as its star Marshall Mathers, who goes by the stage name Eminem. Now, generations from now when my children’s children are reading this review, Eminem will have faded even further from the spotlight than he already has. When the movie was released, though, he was the talk of the town. IMDb Trivia for the film notes that 8 Mile grossed $40,000,000 on its first day of release, an at-the-time record for any R-rated film. Despite actually enjoying several of Em’s songs, I was nonetheless turned off by the movie. It seemed such a conceited move, to make a movie about how hard life was for you before you got famous and bask in this fictionalized biopic while your 15 minutes are still going (an addendum to Andy Warhol’s famous quote: there are different degrees of fifteen minutes).

But the movie is not what I had been expecting, and in fact it’s kind of… well, not bad. Where I had imagined a film that centered on how hard its protagonist Rabbit (Mathers) had it, living in the outskirts of Detroit in a trailer park, the actual viewing showed the subject being approached from a completely different angle. Which isn’t to say that the movie doesn’t pile on the sentimentality: one of Rabbit’s friends points to the abandoned buildings that populate the neighborhood as a sign of the poor quality of life they’ve living in. However, where the movie could have simple wallowed in the grime and shown Rabbit’s rise into super-stardom to be a miraculous escape from the slums, 8 Mile takes a different tack.

It is in this that I have respect for the film.

One of the things that convinced me to watch 8 Mile was a recent article on one of the only three websites I visit, the A.V. Club, wherein the author spoke of the rap battles in the film as a guilty pleasure much as dance competition movies like Step Up can be. As an unabashed Step Up fanatic, this comparison immediately made intrigued me. It was a misleading comparison, though, and while watching Eminem’s film I could not stop thinking about the way that the dance moves of the heroes in Step Up looked great until the bad guys showed off how it’s REALLY done, thus forcing the good guys to “step up” their game (so THAT’S where they got the name!). The rap battles here don’t match that intensity, there’s little to differentiate between the skills of Rabbit over his opponents aside from the crowd’s reactions.

Further, Mathers’ acting is atrocious. There were a few scenes that made me laugh out loud because of the actor’s delivery. For instance, after Rabbit and one of his homies have an argument, they meet each other in a bathroom and there’s a moment of tension. After a brief silence, Rabbit flatly states, “I apologize.” It’s weird. It shouldn’t be, but it is. Instead of just “sorry” or “man, I feel bad about what happened”, the word choice makes the line feel awkward and absurd. Not helping matters is the fact that the relationships between the characters can change in an instant, as everybody seems to be falling in an out of each other’s good graces throughout the entire film. This is most notable in Rabbit’s scenes with his mother, where the two can go from hugging to cursing one another at the drop of a hat.

And let’s not get started on Michael Shannon (Shotgun Stories, Bug), a spectacular performer, a man who can explain the entire emotion of a scene with a look. He’s criminally under-used here, appearing in just a few scenes with no compelling purpose for his character’s existence. Similarly, the late Brittany Murphy, who surely saw this film as her chance at showing off her acting chops by securing a bit of a darker role, has almost nothing to contribute to the story overall.

All of these mistakes, these missteps and malfunctions, nearly all of them can be forgiven because of the strength of the central theme – indeed, the final moments of the film almost don’t necessarily justify what’s come before, but they overshadow it. Because the movie, in the end, isn’t about wading through life and crossing your fingers hoping that luck will strike you. Instead, it’s about this character, Rabbit, coming to realize that he’s been thinking of himself as entitled somehow and coming to terms with the idea of working his way to the top. It’s not an ending that’s quite as immediately satisfying for the viewer as “and they all lived happily ever after”, but it’s one that’s immensely gratifying for the character. He’s been living with this weight on his shoulders, this anger, and he manages to find a way to work through that.

Which is not to say that the change is subtle in any way. And, much as with Step Up, I couldn’t help but to constantly thing about the fact that the characters are living in a world where people carry guns and could literally kill one another at the slightest provocation, so it seems unlikely that Rabbit’s competitors would simply crawl away with their tails between their legs once he has eaten the metaphorical spinach and gained confidence in himself.

I do have a lot of issues with 8 Mile. I would not say that it is a good movie, but it surprised me by not being a terrible one. The characters, the relationships they have, and the journey they take, none of it is convincing. But the place that they find themselves, or rather, the place that Rabbit finds himself, is so honest that it almost makes the rest seem inconsequential.