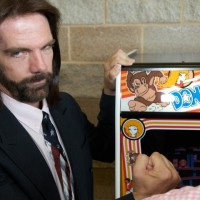 The King of Kong feels much too perfect to be a documentary. The sequence of events, the out-sized characters, the gripping tension and corruption that is inherent in every scene… it’s easy to think that no, no, this can’t be real. This is all a set-up. When Donkey Kong challenger Steve Wiebe shows up at the gamers’ paradise Fun-Spot in order to show up his rival Billy Mitchell, Mitchell’s henchmen make secretive phone calls to him shot from far away through a claw game. Is this real?

It is. Which is what makes King of Kong such a joyful experience. Yes, obviously, there were some liberties taken with the raw footage. For instance, there was another player who had beat Mitchell’s DK record prior to Wiebe’s fight for acceptance in the gamers’ realm, but omitting that information makes the honest competitive nature between Wiebe and Mitchell more dramatic. Because there was actually another person who had topped Mitchell’s score does not undercut the movie at all.

Billy Mitchell seems to think that it does. He is cast as the villain in the film, which is probably unfair, and in the few interviews I’ve read with him after the film’s release, he is defensive. He’s an interesting character – so absurd as to be cartoon-ish. He wears USA themed ties constantly, talks in cryptic motivational phrases, pretty much has the nation’s leading gaming association (Twin Galaxies) wrapped around his little finger, and takes great care never to say anything bad about anybody – preferring to pointedly avoid them than to be put in an awkward situation. He may not be malicious, but it’s easy to see how he could be framed as a villain. He’s got a huge ego and a thinly veiled disdain for anybody who doesn’t find him as amazing as he does.

So there is this back and forth between Weibe, who early on achieves a DK score over 1,000,000 but gets the score disqualified because of Mitchell’s concerns that it was a taped score, performed on a board donated by a guy named Mr. Awesome – another enemy of Mitchell’s, and that’s another story entirely. Wiebe is crushed, but his drive to prove himself leads him to press onward. The tension in his home life is apparent; I’m amazed that his wife was able to put up with it. Getting back to the sense that the movie is way too perfect to be real, there is one point where the top DK gamers are going to compete to have their score placed in the Guinness Book of World Records. Wiebe’s young daughter is talking about this with her father and she says, “Some people kind of ruin their lives to get into that book, don’t they?” Wiebe sits in silence.

It’s a powerful moment, which I suppose is why the filmmakers chose to leave it in, but now that I’m thinking about it, I wish that there had been more emphasis on the strain that Wiebe’s gaming caused his family. Was there any strain on Mitchell’s relationships because of his game playing? There did not seem to be. The movie has chosen what it wants to do, which is chronicle this very visible grudge match between these two players – that works, and it is wonderful. But there are other things, like that, which could have added even more to the film if they were better explored. If Mitchell is so concerned with being made out the villain, why did he act so childish – refusing to answer questions about Wiebe because he has avoided him and therefore, as he claims, doesn’t “have enough information to talk about that.”

Unlike other documentaries that I love, particularly those made by Errol Morris, The King of Kong does not really lead its viewers to any deeper thoughts. It wants to tell a very narrow story, so it doesn’t get bogged down with ruminations on the events depicted. Maybe the filmmakers wanted to let the events speak for themselves, but the public rift between Mitchell and the directors seems to suggest that their framing of him was colored regardless. Either way, what I am trying to get across here is that this movie has a fantastic narrative – it’s a surprisingly engrossing film with plenty of emotional turns. However, it’s not the kind of movie that you will gain a lot more out of on a second viewing. It puts everything out there for you immediately. That’s not wrong, per se, and again this is an immensely enjoyable documentary. It’s just easy to see where it could have dug a little deeper than it does.

The movie has such fascinating characters, but… it’s a documentary – it could have had fascinating people. The people are carved down to their essential parts (the hot sauce king, the science teacher) and then we only get glimpses of the humanity underneath. To repeat myself for the tenth time: The King of Kong does what it does extremely well, but it could have easily done a lot more.