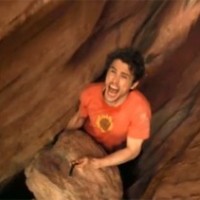 If the purpose of 127 Hours is to show the torment that self-proclaimed “hard fucking hero” Aron Ralston had to endure after getting his arm pinned beneath a large boulder for five days, it doesn’t really achieve that goal. Luckily, the movie isn’t primarily about Ralston’s physical predicament as it is his psychological one – and flashy director Danny Boyle (best known for The Beach) uses flashbacks and hallucinations to add style and keep the story moving. This isn’t an hour and a half of a guy trapped in a canyon – the movies goes lots of places.

I have mixed feelings about that, to be perfectly honest. Some might label Boyle’s choices as gimmicky, which is an easy complaint to make. After all, the movie opens with a 3-way split-screen, showing groups of people at sporting events and city streets, sped up ten times – contrasting with Ralston’s early-morning preparations for his hiking adventure. The editing is quick, the camera looks at the action in sharp angles and close-ups, and so on. It might seem over the top, but when these same stylistic flourishes are used in service of Ralston dehydration-induced hallucinations, they really worked for me.

Flashbacks show pivotal moments in our protagonist’s life. Or if not pivotal, at least important in memory. Moments where Ralston connected or failed to connect with family members and friends, remembering how he blew off anybody who questioned where he would be during the weekend, and piecing this all together as some sick sort of destiny. Is it madness that has him thinking these thoughts, or the clarity that comes from a forced state of meditation?

As far as showing the reality of Ralston’s situation, the film fails to follow through. We see glances at his digital watch to get a sense of time passing, and title cards inform us when the days pass. Maybe it’s the flashbacks which sabotage the movie, but it’s hard to get the sense that Aron has been stuck for days. Dialogue tries to drive home the point, having Franco comment on the flight pattern of a crow that he sees occasionally, but it’s not enough. If the torturous length of time that the adventurer spent trapped were accentuated more, I can imagine that the monotony would have been something that I could have just as easily complained about, though. It’s hard to strike a balance between embodying the lost feeling and remaining engaging. 127 Hours does what it can with Aron’s running commentary, but doesn’t walk the line as steadily as it might have.

A Slant Magazine blurb from the Toronto International Film Festival tries to peg the problem with the movie. Boyle’s latest “has Slumdog Millionaire‘s brand of exploitative uplift, in which cinematic jazziness is mercilessly employed to sugarcoat portraits of human misery.” That’s probably the closest description of the issue at hand that you can get in one sentence. There are two different goals that the movie has – to make you empathize with Ralston’s peril and to leave you entertained. The jazziness works, but at the expense of Ralston’s true dilemma. The movie tries to compensate with its style – a crashing drum-heavy score near the end of the movie does a good job of underlining the emotions of the scene – but a lot of the time it feels like it’s standing in place of the reality.

127 Hours is a pretty fun romp, but that’s only half a compliment.