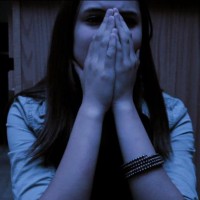 After years of eager anticipation, writer/director Matt Mitchell finally brings us the third and final(?) entry in the Pray trilogy – a movie which must provide a pay-off for such high expectations that it seems Mitchell decided instead to just half-ass the project, ditching almost immediately the plot suggested by the end of Pray 2: The Woods, wherein the mysterious kidnapper known as “The Shape” is revealed to have evaded capture in the most ridiculous way. I say “kidnapper” rather than “killer” because I’m not sure he’s ever actually killed anyone – likely a bit of restraint necessary to ensure the trilogy stays firmly in the PG-range. Because Pray 3D: The Storm, like its predecessors, has been released by Cross Shadow Productions – a film outfit sponsored by Potter’s Hand Bible Church in North Carolina. Cross Shadow is comparable to Georgia’s Sherwood Pictures (Facing the Giants, Fireproof, Courageous), but has not yet been able to cross over into the mainstream. Also, Cross Shadow is seeking to fill a very specific niche with its productions: lame “horror” films suitable for playing at your middle school age children’s church lock-ins.

Actually, the comparison to Kendrick is a bit unfair. It’s true that Sherwood Pictures has been able to give Kendrick a larger budget with each successive outing, but funding is not the only reason that 2011’s Courageous was able to begin with a pulse-pounding chase sequence that easily tops anything in 2006’s Facing the Giants. Kendrick as a filmmaker has become much more confident; as a result, he’s now able to experiment and deliver dynamic, kinetic action. It’s true that I began watching Kendrick’s films because I found their naive religious messages along with the terrible acting of the earlier films tremendously entertaining – but at the same time, I’ve been endlessly fascinated by Kendrick’s growth as a filmmaker over the past decade. For all my cynicism about what Sherwood Pictures stands for, I have to admit that Kendrick’s artistic evolution is inspirational.

In stark contrast with Alex Kendrick, Matt Mitchell has stubbornly refused to add any depth to his craft. He’s strictly utilitarian, and even that description might be too generous.  Much of Pray 3D: The Storm has literally no sense of pacing, story structure, economy of characters, and more. Trust me: this is not “so bad it’s good” fare (if that’s what you’re looking for, do check out Pray and Pray 2), instead it’s “so bad it really should have a shot of Matt Mitchell issuing a preemptive apology to viewers before the movie begins”. When the bulk of the movie has a girl running around a house in the dark while a masked man lumbers slowly behind her – clearly trying to avoid actually having a confrontation with her because that would mean the movie had gained some forward momentum requiring Mitchell to write something for the characters to do – it becomes increasingly clear that Mitchell’s idea well has run dry. Maybe it should have been clear way back in 2007 when Pray was released, given that that movie was 70 minutes of time-killing followed by a two-minute last-act “twist” as pay-off, all based on an absurd Christian urban legend rather than an original concept.

At the start of Pray 3D: The Storm, Laurie Curtis (Amy Mitchell) wakes up from a dream about the events following the end of Pray 2. This will be the only reference to the series’ canon. Though later in the film we will hear on television (on FAUX NEWS, how witty!) that a prison transport vehicle has overturned and released its detainees, this really doesn’t mean anything to viewers given that the end of the last movie showed The Shape was never in custody to begin with! In fact, the incredible twist ending of Pray 2 is never once addressed here at all. It’s almost as though the movie is intentionally trying to pretend that the previous film never happened: when Curtis and her husband go out of town, they hire two teenage girls to babysit their young daughter, the girls both excited to stay the night in the house “where Pray was filmed”… even though Laurie Curtis wasn’t in Pray – only in its sequel. Oh yeah, this seeming “meta” thread, where teens reference the series they’re in? There’s nothing to it. It serves no purpose at all, except, I guess, to let the audience know that the filmmakers actually do remember what movie they’re making.

Or at least they don’t to Matt Mitchell, who here proves definitively what he’s been trying to convince his viewers of all along: that he should in no way be considered an accomplished or even competent filmmaker.

P.S. I rented this movie streaming through ChristianMoviesDirect and therefore it was not presented in 3D. I’m not sure that the movie was ever actually in 3D, to be honest. Actually, a bit more research suggests that it has been presented in the 3D format, but what possible use could it have been put to? There is nothing in this movie that could justify its use. And while we’re here, as a “Christian” film, Pray 3D: The Storm is lousy as well. If there is any religious message here at all – and I do mean if, because I don’t remember a character even saying something like “help me Jesus!” like the character in Pray did to remind us that we are watching a Christian film – but if there is a religious message, it is totally overshadowed by brain-dead plotting which makes it impossible to take anything about the movie seriously.

Leave a Reply to Matt Mitchell