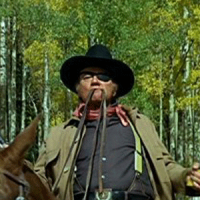 I feel like True Grit would make a better play than it does a movie. About the only thing from the movie that would be lost is the expansive scenery and, I suppose, the horses. Otherwise, though, the story is small enough that it could be narrowed down to a few simple sets – a table and chairs, really – and the dialogue already feels so damn written that not much would have to be changed.

Which is not to say that the movie isn’t strongly enjoyable. It is. Wayne is, of course, a commanding presence on-screen and he is matched by Kim Darby as the strong-willed Maddie. Though the words they say are sometimes aggravatingly false, it’s usually easy to get past that and enjoy the soft humor. The movie is ostensibly about the journey that Maddie sets out on with mean marshal Rooster Cogburn (Wayne) and Texas Ranger something-something LaBeouf (Campbell) to capture and punish the man who killed the girl’s father. In reality, though, as hinted at by the title, the film is about the growing relationship between our three main characters. The film shows its hand when the two older men deny Maddie a place on the ferry that will carry them into Indian territory. She’s a girl, she’s a child, it’s too dangerous, and so on. As the ferry sets forth, Maddie drives her horse into the river and crosses before the men can get to shore. Rooster marvels at the event, saying, “She reminds me of me.”

That’s probably the best moment in the film, so I’m sorry for ruining it for you, but it’s essential to the point that I am trying to make. Maddie memorably calls out the film’s title by referring to Cogburn as a man who has “true grit”, although where she got that idea is beyond me. Thus, we’re led to believe that the film is about Wayne’s character. But it is in the ferry scene and Cogburn’s smile that it becomes clear that the title character is actually the girl. I like that. The physical A-story, regarding the tracking and capture of murderer Tom Chaney is compelling enough – there are several scenes that have stuck in my mind ever since first viewing this film nearly ten years ago. But this more abstract B-story, about the growth of our central group’s relationship, is equally intriguing.

Unfortunately, though, my praise for the film ends there. Where the revelation that Maddie has as much grit as her older counterparts (even LaBeouf is full o’ grit – as evidenced by his heroic last feat) is exciting, it is dampened tremendously by the fact that there is absolutely no chemistry between the leads. Perhaps the blame for this can be put on the actors themselves, given that IMDB trivia notes that Wayne admits that he did not like his leading lady. But certainly it’s not all the actor’s faults. When the movie forces some sweetness between Maddie and Rooster near the end, it is wholly unearned and feels out of place. Maddie alternates between being arrogantly brazen and helplessly childish, while Rooster swings back and forth from the Hammer of Morality to drunken bully. By the film’s climax (which, incidentally, comes too easily and out of nowhere), the characters have not exhibited any sort of growth. How are they different than they were before? Why should they care about one another? And that dialogue! Ugh. Add to this a cheesy epilogue that feels contrived and silly. It all almost adds up to completely leave the film completely devoid of any positive attributes.

Ah, but no. The actors, the character individually are fantastic. They mix like oil and water, but water on its own ain’t bad. And there are those amazing scenes, such as one where the trio waits in anticipation of the gang of toughs led by “Lucky” Ned Pepper (Duvall) – or how about when Maddie inadvertently stumbles upon the man she’s after? As I said before, this film would benefit drastically from being transferred to the stage. It’s so aware of what it’s doing, it never feels organic. That’s okay in the theater, where the artifice is part of the experience. It’s not okay here.

True Grit is a classic and it is definitely a good movie. But it’s far from a great one.