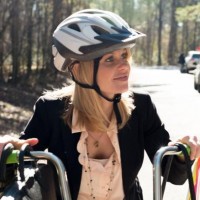 At the outset of Finding Normal, we are introduced to Dr. Lisa Leland (Candace Cameron Bure, a.k.a. DJ from television’s “Full House”) as she callously shoos away a desperate patient so that she can begin her vacation. She’s preparing to drive from Los Angeles to New York in order to be with her boyfriend. There is no suggestion that this is anything more than a vacation, so I’m a little unclear why a successful surgeon couldn’t have bought a plane ticket… but I guess when you’ve got two dozen unpaid parking tickets, you prefer to live on the edge. Unfortunately, Dr. Leland lives a little too close to the edge – driving 90 miles per hour through a tiny, backwater town in Louisiana – and gets arrested. The town is Normal.

Or so she thinks! Well, I mean, that is the name of the town. Dr. Leland is brought to the town judge, Doc (Lou Beatty, Jr.), who has that nickname because he is also the town’s doctor. The Honorable Judge Doc tells Dr. Leland that she can escape justice by paying a $2,000 fine, but they will only accept cash. Because she has no cash, Dr. Leland is forced to take option number two: complete 16 hours of community service physicianing around town. “Oh my god,” Dr. Leland exclaims in frustration. The Honorable Judge Doc becomes suddenly stern: “Taking the Creator’s name in vain could come with a sentence more severe than anything I could hand down.”

So that’s what kind of town Normal is. And, wait, what? I guess I knew that “Don’t say my name” is one of the Ten Commandos, but really? Surely that one’s just a personal preference, right? I mean, only some kind of sadistic bastard would enact an extreme punishment just for saying its name, right? Speaking of which, here’s The Honorable Judge Doc to whisper on the sly, “Lord, you answered my prayer. You sent her. Now how do we make her stay?” Oh wow. There must be some kind of Stepford Wives voodoo going on in this town. Get out, Dr. Leland! Run for your life!

Ah, but she’s already been trapped. You see, while stomping around town trying to get cell phone reception, she runs into a preternaturally handsome Southern boy named Lucas. Of course, she immediately dismisses him as a brain-dead country bumpkin, but that’s before she realizes he’s the lily-white adopted son of Normal’s black doctor-judge. I’m skeptical, but let’s see how this plays out. Dr. Leland comes over for dinner, where she and Lucas get into an argument and obviously they’re meant to be together. If there’s one thing I know about movies, it’s that people who have nothing in common and can’t stand being around one another are destined for marriage. It’s a little sick.

Speaking of a little sick, Dr. Leland goes around town the next day on a children’s bicycle (why not?) doing house calls. The movie wants to have a wacky montage of quirky characters, but settles for just two: one wants Dr. Leland to treat her dog like some kinda common vet, while the other is even more kooky… she wants Dr. Leland to pray for her before doing her medical magic. When Lucas comes to pick Dr. Leland up because I guess they’re friends now, she recounts this tale and wonders at how bizarre it was. In her experience, prayer loses out to the power of a prescription for amoxicillin. Lucas responds, “I don’t think there’s a conflict between the two.” I don’t… I’m not even sure what that’s supposed to mean. I guess he’s right: there is no conflict between medicine and doing nothing at all, since they’re in no way comparable. To her credit, Dr. Leland asks, incredulous, “You do know the earth is round, right?” A legitimate question.

As it turns out, Doc Judge is also the town’s minister, because of course he is. When Dr. Leland attends his church for a pancake breakfast, he tells her his philosophy about tending to people’s illnesses. He argues that even if you make a person as healthy physically as possible, they’re still not completely whole because they’re left with a fear of death. I find that so interesting because I’m really starting to believe there is little else supporting religious belief in the 21st century except for a desperate desire to escape death. Aside from Pastor Judge Doc’s admonition against saying “oh my god” earlier in the film, this is as close as the movie gets to advocating for its religion. I guessed at this point (40 minutes into the movie) that the film would follow the typical Christian movie template, revealing later that Dr. Leland went to medical school because she was angry at God on account of some tragedy – a parent dying, perhaps? Surprisingly, that prediction never came to fruition, although a character does say that there’s nobody to give her away at her wedding, so… maybe it’s in a deleted scene?

Anyway, Dr. Leland saves a little girl at the pancake breakfast by stabbing her with a shot of epinephrine after a bee sting and even though she saves lives left and right in Los Angeles, it’s different in the rural South, you know? It inexplicably means more. She’s starting to love living in Normal! She’s starting to fall in love with Lucas! And her boyfriend in New York is all about making money, yuck! But actually, her boyfriend Steve drives all the way down to Louisiana to retrieve her and propose marriage. First, planes exist, people. Sheesh. Second, his licence plate reads: “DR STEEV”. Was “DR STEVE” taken, or is that how he really spells his name? When Steev arrives, it begins raining and yet nobody says the phrase, “There’s a storm coming.” This movie keeps disappointing on the cliche front. Despite Lucas’ sad-puppy expression, Dr. Leland ultimately opts to go back to New York with the boyfriend of five years who just proposed to her instead of marrying the flat-earther country bumpkin she’s known for 2 1/2 days.

Or does she? I think you know the answer, so I won’t get into it, except to say that when Dr. Leland inevitably drops her boyfriend like a ton of bricks, he protests, “None of this makes any sense.” Her response? “I know. Which is why it makes all the sense in the world.” Obviously, that response makes even less sense than anything that came before, but I have to guess the intended religious audience will be able to relate quite well.

But wait, there’s more! For no reason at all, Finding Normal makes room for a subplot where Lucas drives to the big city to defend the town in a lawsuit filed by the ACLU. You see, there’s a lighted cross on Mt. Tinker in Normal; a lighted cross that just so happens to be on public property. Mr. Irwin Driscoll of Massachusetts drove through Normal once and was offended by it, so he’s sent the ACLU’s pitbulls to take it down. Though a petitioner who lives in Massachusetts would have no standing, the movie conveniently ignores this technicality for the sake of painting the petitioner as the other, i.e. someone who is not a Normal person. The selection of that liberal Valhalla Massachusetts for this other person’s home is clearly intentional. Dr. Leland glances over at the opposing side, where three ACLU lawyers sit in their fancy suits sit, as opposed to Normal’s good-ol’ fashioned pro se reg’lar Joe. “Looks crowded over there,” she clucks. Lucas initially moves to dismiss the case on the basis of tradition & petition: that is, the cross has been on Mt. Tinker for  a long time and there’s a petition a bunch of people signed saying they want it to stay. The judge (not Pastor Judge Doc this time, thankfully) is remarkably snide to the ACLU lawyers, but ultimately decides that those are bogus arguments for upholding a constitutional violation. The case will continue.

Dr. Leland, acting as though she’s unpacked a complicated riddle, says, “I think the key word is public.” This is the kind of  expert legal analysis them pro-feshnul lawyers from that fancy non-profit organization couldn’t have come up with. Oh, but just you wait: her suggestion for ending the legal battle? Just buy the mountain. Yes, just buy the mountain! Why didn’t we think of it before?! Public property means it’s on sale to the public, right? And indeed, it is! Lucas returns to the next court hearing with a bill of sale stating that he bought, specifically, the 25′ x 25′ plot of land where the cross stands. Haha, he’s subverted the system! Or… done exactly what the ACLU wanted, since the issue is government endorsement of religion, not “the existence of crosses”. But whatever, let’s let Lucas have his moment of victory.

Because he’s lost the bigger victory. While the movie was celebrating Lucas’ meaningless win, it totally forgot that it needed to convert Dr. Leland before the credits roll. I assume she’ll eventually fall under the spell of Lucas’ charm and follow him to the ends of the church, but at the moment the screen turns black, the closest she’s come to accepting Jesus is smiling at Pastor Judge Doc’s pre-pancake sermon. She’s still nominally non-religious when the movie ends; it may be a small silver lining, but I’m still going to chalk that up as a win for the forces of not-trapping-people-in-your-town-just-to-force-them-to-become-Christian.

Leave a Reply to Eu Sei