When Should I Have Let the Right One In? 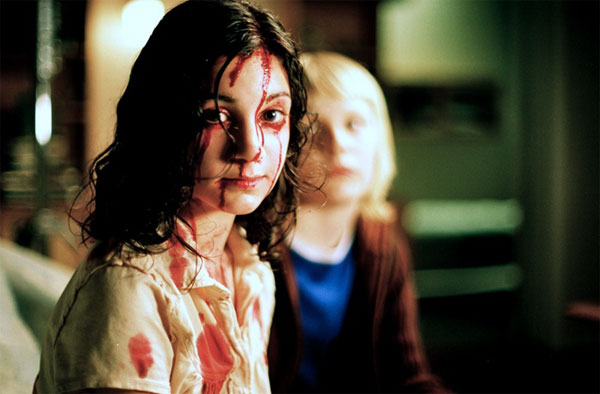 Well, I finally did it. I rented and watched what many believe to be one of the best films of 2008: the horror-drama Let the Right One In.

The result? I was not all that impressed.

… I know – I am just as perplexed by this as you probably are.

Whenever I watch a movie, I’m rooting for it to be just perfect enough – you have to allow some wiggle room for error (but then it’s up to you how much space you personally want to devote to that). I feel this mentality is a great one for judging motion pictures. Any film I give a perfect rating to seems to me to truly deserve it while the other less fortunate films – the good, the bad, the great, the horrendous, and the mediocre – are subjected to a more succinct treatment of honesty than if there were no system at all.

This process can also be the set-up for an active mind’s Burmese tiger trap. Every once in a while, I will see a movie that was given stellar reviews from critics and moviegoers alike but causes a mostly opposite effect on me – as is the case of Right One. Some people in my life assure me that I would probably benefit more by merely stating “I didn’t like it” or “It was a weird movie” (or “I was not all that impressed”) and move on – that there is no need to analyze the reaction further. At the expense of revealing how neurotic I have become, I somewhat disagree with this. To be judgmental about anything and to vocalize opinion is to enter a battlefield – you better have the correct amount of artillery to defend yourself should the occasion arise.

So here we are, back to pondering why I didn’t appreciate Let the Right One In as much as the rest of the world. I have already dug through a lot of dissected innards up to this point on the matter. For one, there is the fact that I’ve never been particularly blown away by anything vampire-related. We can all agree that the film takes place in present day (or at least close enough – there is a bit of an ’80s vibe from the characters’ wardrobes and styles, but I digress). So how is it that the potential victims are so slow at realizing they have a vampire among them? Is this a world where famous names like Bram Stoker, Bela Lugosi, and Count Dracula never graced anyone’s ears (other than the well-read Oskar, the only character to say the “V” word in the whole film)? Preposterous! And what about the stuck aging process of our little bloodsucker Eli? She is clearly a nod to Anne Rice’s character Claudia from Interview With the Vampire: The Vampire Chronicles, but if she’s smart enough to solve a Rubik’s cube within 24 hours of her first try, wouldn’t she also be able to figure out she is far older than twelve and comprehend the pedophiliac nature of “going steady” with the authentically twelve Oskar? To argue that she still has the twelve-year-old mentality doesn’t make much sense – she seems exponentially far from the type who flat out refuses to continue to learn. Maybe Eli has a hidden agenda. Maybe vampires are more evil than we have originally thought…

This is coming off as a case of completely pretentious nitpicks, I’m sure – mostly because I feel similarly about my problems with the silly fictional subject. So when I get to this point of my frustration with my inability to pinpoint exactly what went wrong with my viewing experience, I take a step back and try to find a bigger, more substantial, clear-as-daylight reason that I am not with the majority. I don’t know if I’ve discovered it yet, but I’m starting to wonder if the problem is simply that I saw the three-year old film too late in the game.

The more I consider this option, the more sense it makes. Right One was released to American audiences incredibly close to the same time the first entry of the Twilight adaptations was revealed. It was another instance of two differing films with the same generalized theme allowing the critics to play the game of Compare & Contrast as to  inform any potential ticket-buyers (See also: A Bug’s Life/Antz, Deep Impact/Armageddon, Paul Blart: Mall Cop/Observe and Report, etc.). I agree that Right One is a much better movie, but exactly how fueled by Twilight exhaustion/prejudice is that (“Top Critics'”) 97% rating for Right One on the Tomato-Meter at Rotten Tomatoes? My prediction is the answer is a much larger statistic than the first guess (which also says something about how bad some moviegoers passionately feelTwilight is).

Occasionally timing is everything – especially in the business of movies. It’s a lesson I’ve been reminded of a lot lately. When I watched a cinema’s first screening of The Help last month on its opening day’s afternoon (something I believe I’ve never done with a new film – though I’m not counting midnight showings), my timing was rewarded afterward with the pleasure of seeing how future audiences would individually react (and boy, did they ever react – powerful word of mouth kept it at the top of the box office for 25 days straight). The outing provided quite the window for me as to how those first audiences can make or break a film. I imagine quite a few of Right One‘s first audiences were horror fans ready for some awesomely portrayed violence. In this regard, the film does not disappoint; it supplies more than enough bricks of coal to light the fire.

Another example of timing with movies that shoots immediately to mind is admittedly more of a theory. Roger Ebert is well known (or maybe “notorious”) for standing by his opinion that video games are not art. Last year, he took a hiatus from writing reviews to work on writing his autobiography. Among the films that slipped by during this hiatus? Scott Pilgrim vs. the World, a comedy adaptation of a graphic novel with a style that is heavily inspired by the pop culture of video games. Since Pilgrim is a movie that for the most part “does its own thing,” it is more than understandable that avid readers of Ebert would anxiously anticipate his thorough reaction to the flick.

I, for one, now hope he never writes one – it should forever remain an unsolved mystery. While Pilgrim is a fairly decent film, its moment in the sun has faded. There are films that will potentially forever remain timeless, but Pilgrim – the big-time embracer of an undercurrent fad – is not one of them. If Ebert has been exposed to his colleagues’ opinions of Pilgrim in the slightest (and I don’t see how he could not have been by Septemeber of 2011) then who is to say his review would not be influenced in one way or the other and therefore unauthentic? It would have been nice to see what he had to say (he could maybe – maybe get away with creating a replicated instance and seeing it on some other hot summer day), but I think that ship has sailed.

Perhaps this is a similar problem with me and Let the Right One In. Part of me wishes I had seen the film while it was still in theaters or even immediately upon the heels of its DVD release, but now I feel somewhat obligated to have to make due with the fact that I saw it when I did and convince myself that I am grateful for allowing the film’s popularity to wear off and all that other movie nerd jargon. Some films are made with the purpose of repeat viewings and some are made to treat those who were eager enough to seek it in a cinema showroom. I am beginning to think Let the Right One In is an example of the latter – that I failed to see it in its designated fashion.

… Or maybe it’s too much of a bloated art house picture….

5 Responses to “When Should I Have Let the Right One In?”

Leave a Reply to Nick