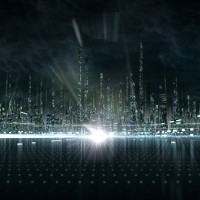 I know a lot of people, Jim Emerson in particular, who dismissed Christopher Nolan’s extraordinary Inception, which came out the same year as this reboot (funny term to use to describe a movie whose premise is, technically, about computers). The reason for their dismissal came in the fact that Nolan’s film, though about dreams, was not dream-y enough for those viewers. Which is a bizarre complaint to have with that film, but that’s an argument for another day; or more accurately, a day several months now in the past. The reason that I bring this up today, though, is because I’m surprised that I did not hear more of an outcry at the release of 2ron. If you look at the trailers for the film, they’re obviously trying to sell you on the spectacle. After all, isn’t that all that the original film had going for it? They show glowing polygonal ships flying across a darkened landscape, futuristic vehicles and a dystopic world where anything can happen. How cool, yeah?

In reality, though, the movie is barren. There are illuminated jumpsuits, sure, and colorful streaks of light that emanate from the back of those iconic motorcycle-mabobs, but everything else is empty. In Ebert’s review of the film, he makes a comparison to James Cameron’s Avatar. It’s interesting, because I made the jump to that film as well, but for different reasons. I remember reading something from director Collin Buchanan which applauded Cameron’s use of 3-D, particularly in one scene that shows a large group of soldiers, ready for battle. The effect added depth to the scene in more ways than one, as each of the soldiers were individual and it helped add to the feeling of being in the moment with these characters. In 2ron, there is a similar speech given in front of a large group of soldiers. But these soldiers are faceless, a copy-and-paste job on a grand scale. That lack of definition is a major problem with the movie.

Instead of a wild fantasy world, the world of “The Grid”, where the movie primarily takes place, is dull. A character points out early on the beauty of a bridge in our real world – in comparison, The Grid is an eyesore. It has large areas of space with no clear borders. Take practically any scene: the motorcycle challenge, the multiple Frizbee fights, a cruise through the mountains, an aeroplane chase… each setting has an infinite and uncharacterized flatness to it, like going in circles. I suppose a fan of the movie might point to this as an example of the film marking the difference between the real world and that of The Grid, which is a computer program and should rightly be expansive. Yes, but then internet is expansive – it’s not empty and boring. Further, I don’t meant to give the impression that this lack comes on a purely aesthetic level – it’s manifested in other aspects of the movie as well.

I, for one, am not impressed by the score – similarly shapeless and with a reliance on an oppressive heavy thumping to do most of the work. Not really a lot I have to say about that, though. No, adding to the blobby void that is 2ron comes its star player, actor Garrett Hedlund, playing Sam Flynn, the neglected manchild of ENCOM co-founder Kevin Flynn (Jeff Bridges), both of whom wind up trapped in the computerized landscape of The Grid by not learning from the mistakes of Wayne Szalinksi. Hedlund is a pitiful actor, and certainly does not have near enough charisma or goodwill to carry an entire film. I was trying to articulate my feelings about this to my wife prior to writing this review and she compared Hedlund to Hayden Christensen (of Jumper fame). I agreed whole-heartedly, at first, but thinking about it now I’m not convinced. Christensen at least has the decency to be bad, to provide a car-crash worth watching. Hedlund’s performance is more like a minor fender-bender on the side of the interstate that nevertheless slows traffic down to a crawl. When you finally get to the scene of the accident, you can’t help but think, “Really? That’s what this was all about?”

In a similar fashion, Hedlund is simply stalled on the shoulder. The script doesn’t do him any favors, providing a character who is more or less cobbled together from cliches and suspicious motivations, but a stronger actor could have at least made him seem human. Hell, I would have taken Shia LaBeouf. As it stands, the young Flynn could very well be just as much of a product of the computer program as most of the other characters in the film. Sam’s tepid love interest, the exotic Quorra, is equally lifeless – but at least she has the fact that she’s not a real girl to fall back on, a scapegoat that Sam can’t claim. The most interesting actor in the film, to no one’s surprise, turns out to be Jeff Bridges (here playing a dual role as both God and the Devil). Here, even, the most exciting moments come when Bridges lapses into what remains of The Big Lebowski‘s The Dude, rather than in the allegedly tender moments. When Kevin Flynn is reunited with his son after 20-some-odd years, the moment they share feels akin to a nod and a handshake. This is how you react to seeing a man you previously thought was dead? This is how you react to seeing a son you thought you’d never see again?

I’d like to say that there were bright spots in the film, that at the very least a few of the action sequences were done with some measure of pizazz. I’d be lying, though. In fact, the single most engaging moment comes fairly early on in the film. Sam is brought to the evil lair of CLU, a computer-generated version of his father that is bent on world domination bwahahaha. Of course, at the time, Sam is unaware of CLU’s true nature and believes that the man he has been brought to is merely his strangely ageless father. However slight it is, there is a genuine tension during this scene as the hidden motives of the one character are held behind a cloak so that the other cannot see. It’s a moment that the rest of the film fails to match.

A lot of critics I’ve read are want to call it an awkward focus on exposition over story, and I’d admit that that is probably part of it. But I think it goes deeper than that. 2ron is poorly handled in seemingly every way, from the visual flair (or lack thereof), to the sound editing (god, I hope the fact that it was impossible to hear the dialogue over the awful soundtrack was just the fault of the theater), down to the actors themselves (oh, Michael Sheen, I’m so sorry that you had to be in this). It’s a mess. And it’s not even a glorious mess, but instead the kind that just makes you breathe a heavy sigh of resignation.