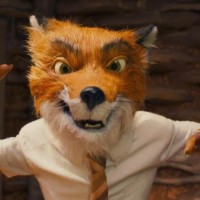 This may be my favorite Wes Anderson film.

A lot of the typical Anderson flourishes remain, which led one of my friends to cite this as “the most Wes Anderson film” that the director has made. That’s not entirely untrue. There’s no slow-motion sequence, thankfully, but otherwise the film plays out a lot like the follow-up to The Life Aquatic. You’ve got the yellow block-letter title cards, the narrated introduction to characters detailing their quirks. There’s the indie-pop soundtrack, the strange way that these upper-class characters talk, issuing off-handed yet profound statements during fits of melancholy. It’s all there. In fact, that alone is almost enough for me to say that this is not a movie for children.

Not that the movie is profane. Instead, Fantastic Mr. Fox is not a movie for children because it is approached from an adult’s perspective. The themes are definitely more mature, touching on Anderson’s typical subject matter: familial strife. Furthermore, a lot of the humor of the film comes in the way that the animals act very much like humans while retaining their animals natures. When two of the characters get into an argument, it briefly turns into a growling match with claws bared before they come to their senses and begin acting civilized once again. It is precisely that sort of deft handling of the characters that makes the movie such a joy.

Not only that, but the script (by Anderson and Noah Baumbach) is nothing short of extraordinary. The characters, again, are fleshed out well, but there’s so much more here. From the deeper ideas at play here about human nature and Mr. Fox’s personal struggles (e.g. the true reason why he is known as ‘Fantastic’) to the hints about a rich background that is never directly addressed, the writing is magnificent. There are a few hiccups, of course – the scene where Fox explains his whistle-click habit is pointless – but overall, the writing was breathtaking.

Of course the design was spectacular as well. The movie was shot in clay-mation style a la Wallace and Gromit, and an immense amount of detail was put into each frame. The characters themselves all have unique wardrobes and the slowed down film technique made each movement of the characters’ fur noticeable. Additionally, the sets were all intricate in their construction and did as much for combining the human characteristics of the characters with their animal characteristics as the script did. Just seeing the layout of the Fox family’s tree house is a treat because of the care taken in bringing the scene to life.

What separates this movie from Anderson’s previous work is in those new dimensions, the animation and the fact that the protagonists are animals. It gives Anderson greater control over the characters. Each movement is precisely chosen, each line specifically written. Unlike a live-action feature, there is little room for improvisation here. The filmmakers knew exactly what they were doing. That’s what makes me so deliriously excited about the film. It’s no accident that Mr. Fox will stop mid-conversation when he gets near a road, scamper across quickly, then continue what he was saying. It was a conscious decision on the part of the filmmakers but it comes across as being so effortless and natural to the animals. This is the way they live their lives, and because it seems so natural to them it becomes natural to we the viewers. You almost have to force yourself to watch for these things. This is a movie that asks you to be aware – let me say it again – aware. Few movies, especially ones that are ostensibly aimed toward children, have the guts to ask its audience to be patient and attentive.

Fantastic Mr. Fox is a joy to watch. I’ve seen it twice now and after both viewings, I was disappointed that it had to end. This is an excellent film.

6 Responses to “The Fantastic Mr. Fox”

Leave a Reply to Nate