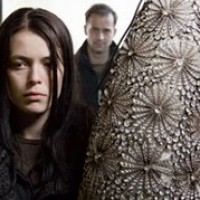 I was really bothered by I Spit on Your Grave when I first saw it, despite the fact that it was a clear exploitation flick. It felt too real to me, so when some horrible act of violence befell the main character it was too easy for me to imagine what it would be like to be in that position. Although it is nowhere near as brutal, Slovenka (also known as Slovenian Girl and A Call Girl) kind of gave me the same chills.

It’s really easy to imagine being annoyed by the film. I recently watched a movie called Suspicious River in which a woman offered herself as a prostitute to men who stayed in the motel she managed. That character was hard to stomach because of the aloof and arrogant way she acted around almost everybody. In Slovenka, it is everybody else who acts weird. It’s difficult to ascertain the motivations of most of the characters. For instance, at one point the main character Alexandra meets a man on some steps and she accepts a cigarette from him. He talks about money with her while she gazes into the distance. It is difficult to tell whether we are supposed to interpret their relationship as one of antagonism or friendliness. Is he a client she had in her prostitute life? A former boyfriend? A childhood friend? It is impossible to tell. Other characters seemingly refer to Alexandra’s extracurricular activities nearly directly, but then later it appears that they don’t really know what is going on in her life. So I guess everybody is just needlessly suspicious?

Where the jolt of the film really appears, though, is the moment when Alexandra is approached by two men who have heard her name on the news (in connection with a possible murder, but that’s unimportant) and want to offer their protective services to her. Of course, what they mean is that they want to act as pimp to a well-known prostitute. But Alexandra is only in it for some occasional extra cash, and the way they try to persuade her to agree to their terms – holding her off of a fifth-floor balcony, emptying her purse, etc. – gets downright frightening. They treat her as though they own her, which I suppose is sort of the idea. But seeing this from the point of view of the victim, it’s more than just frightening. It’s debilitating.

When Alexandra gets away from her captors and returns to her father’s apartment, the sense of unease does not abate. Throughout the rest of the movie, for this viewer anyway, it was hard not to keep thinking in the back of my mind, “They could return at any time.” These men had intended to go to her house before she escaped from them. What’s to stop them from showing up at any time? It’s impossible to feel safe in your normal routine when you know that there are men who are searching for you, and when they find you it’s unlikely to be a warm reception.

I’m sure that my interpretation of the film led me to enjoy it much more than I would have otherwise. The cryptic way that many of the characters speak is one thing, but the movie also jerks between two different emotions when it cuts to Alexandra’s father, going through a blissful mid-life crisis wherein he gets his old band back together for a few last gigs. The scenes with her father sometimes try for comedy, an idea which clashes mightily with the perpetual dread kept on hold in the A-story. Then, much like in Suspicious River, the movie chugs through some disturbing details and then it all turns much too obscure and ‘artistic’ just before the end. Instead of a final punch to the gut, it’s almost as if the movie walks into the sunset while the camera remains motionless (I’m speaking metaphorically, of course).

All of which is to say that I liked Slovenka, overall. It is artfully constructed as a film and mostly manages to suspend the sickening feeling of certain doom. But there are a lot of glaring missteps, too, which can easily take a viewer out of the action. I was more in than out, but it’s not hard to envision a world where it could have gone the other way. I think I can objectively say that this is a film that is good for some reasons, but still keeps its audience at arm’s length for some reason. More focus might have made it better.

Leave a Reply to Višnja