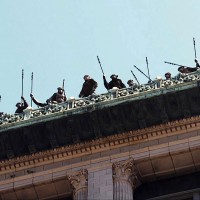 I’ve been excited to see Rise of the Planet of the Apes since I first saw the trailer back in May of this year. I sought out director Rupert Wyatt’s previous work in order to prepare myself and watched the original Charlie Heston film days before the release in order to get in the spirit. My expectations were high that this movie would be an awesome summer event. Luckily for me, my expectations were met. The movie is an exciting adventure, driven by the character of Caesar (Andy Serkis), an ape who expresses more thoughtfulness and breadth of emotion than any of the human characters in the film. It’s tempting to try to look at things – especially in film – as being black and white. This is the good guy, this is the bad guy. What’s remarkable about Caesar, as well as his surrogate father William Rodman (James Franco), is the gray areas of morality that their actions encompass. Many critics have charged that this newest entry in the Planet of the Apes saga lacks the philosophical consciousness that the original possessed. While it’s true that this film doesn’t bring those thoughts to the forefront in the same way (and that’s probably for the best, really), it would be a mistake to say that the movie lacks the same gusto for ethical dilemmas… and I’m not just talking about “don’t test drugs on animals” political statements.

The movie is about an ape named Caesar who, as a result of medical experiments for a drug called ALZ 112 – or, as scientists prefer to call it, “the cure for Alzheimer’s” – gains increased intelligence. After the experiments go awry and an ape escapes to wreak havoc in the building, the board of directors votes to end funding for this experimental drug, and all of the apes are to be put down. In a strained plot device, one of the apes is brought home to live with Rodman and his demented father and grows to be part of the family. But not for long. Actually, that’s not true. A good portion of the film involves the growth and development of Caesar as he ages. He begins as a care-free ape, swinging around the house and watching with fascination as children play together outside. As he ages, his human family bring him out into the world, talking to him as though he is just as human (albeit, a human who they keep on a leash for fear that he’ll run away and bite somebody’s face off). Caesar is taught sign language, but it’s clear that he has an astounding grasp on the English language as a whole. When he sees a dog on a leash, he signs to his father/owner, “Am I a pet?” Try explaining that one to your child/pet.

As he grows, Caesar becomes increasingly disillusioned with the lifestyle that he’s been accustomed to. Because he is an extremely intelligent ape, we get to see all of the scenes of Heston from the original film play out reverse-ways as Caesar himself ends up placed in a cage, taunted and tormented, sprayed with a fire hose and so forth. All while Tom Felton (Draco Malfoy from the Harry Potter movies) painfully quotes lines from the original film. Though Felton’s delivery ranges somewhere between awful and abominable, I can see where the movie was going with at least one of the lines – it presages perhaps the most powerful moment in Rise – so it’s nice to know that these were not only a cheap nod to the films which preceded this. But here’s the thing: in Caesar’s growing distrust of humanity and his lust for power, does he become a villain?

One amateur critic on Flixter referred to Caesar as an exciting “antagonist”, a term which struck me as odd. There’s a spectacular moment in the amazing 1992 socio-political thriller Falling Down (Julie, I swear I’ll get to this review soon) where Michael Douglas, after rampaging through southern California on a quest to get to his daughter’s birthday party reflects on the situation. “I’m the bad guy?” he wonders aloud. We watch Caesar grow up happy, we watch his mistreatment, we can sympathize with his disenchantment with mankind. And yet, at the same time, he becomes the leader of a revolution which ultimately becomes a war with humanity (although we don’t see that as a full-formed idea in this film). He sparks a massive change in the hierarchy of the entire planet; as human beings watching the scene unfold, it’s hard not to see his actions as detestable. This is a complicated character, torn between two worlds, and portrayed with eloquence by Serkis. Hell, while we’re at it, the CGI is really not bad: there’s not a single ape in the film which wasn’t made from a computer, but it’s often difficult to tell.

In addition to Caesar, there is Will. Hardened by his father’s growing dementia, Will steals a tube of ALZ-112 from his workplace and administers doses to his father, whose recovery is quick. I suppose that Will is a mad scientist, in that he refuses to listen to the board of directors and forges ahead with human trials of the drug without anybody’s consent. But he’s driven mad by the love he feels for his father, not because he wants to bring a monster to life with lightning. When things get out of hand, Will is the one petitioning for greater caution. It might read as a strange and sudden break in character – you’re the one who started human trials in the first place, now you want to stop? – but in reality, he is finally able to reconcile his pragmatic, socially-conscious mind with the previous selfish desire to help his father in whatever way he could. So is Will Rodman a mad scientist, or is he a tragic scientist – a man who wears a white coat to cover his bruised psyche, the product of repeated failure.

There are so many great scenes in Rise, from a literal cage-match with Felton to a eerily fog-covered battle on the Golden Gate Bridge, to much more restrained moments where all Caesar has to do is look at the humans that he encounters and yet the viewer is able to understand the bitter sadness that he feels inside. Wyatt’s direction is surprisingly spry, leaping along through the trees and swirling around with the apes. This is a great step forward for him after the mostly listless direction in 2008’s The Escapist. There are some brazenly one-note characters, such as Rodman’s boss Mr. Jacobs (David Oyelowo) and others who have no shape whatsoever (e.g. Freida Pinto and Jamie Harris). Some of the references to the previous films are laughable, the human acting nothing to write home about, the science of the film barely intelligible (“We’re doing ‘tests’ on the chimps, whatever that means”). And that scene in the trailer where James Franco drives away from a building that’s exploding? Not in the movie.

But there’s so much I did like about the movie, so many ways it was impressive in spite of its few failings. I think it may be safe to say that Rise of the Planet of the Apes is the best movie of the summer of 2011.

4 Responses to “Rise of the Planet of the Apes”

Leave a Reply to Josh Glasgow