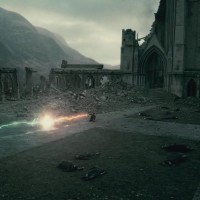 So impressed was I by the first half of the final Harry Potter film that I declared it the best movie of 2010. It differentiated itself from the previous films in the series by being much more low-key and personal, despite the fact that the action at this point is ramping up for the final battles. A lot of the movie involves the three main characters – Harry, Ron, and Hermione – camping out in the woods, trying to figure out where to turn, and growing in fear and confusion. How very much the film diverged from the tone of those which had come prior excited me, and I was hoping that the second half of the finale would maintain that sense of somber complexity. It does not. Harry Potter and the Deathly Hallows: Part II returns to the heart of the war, pitting the good wizards and witches of Hogwarts against the evil Death Eaters led by Lord Voldemort. The movie is all about sending the series off with an epic closing face-off, hurriedly wrapping up the tale’s many threads, and appeasing the fans’ desire to see everything from the books brought to the screen. Because there was so much to accomplish, the film is unfortunately unable to take such a leisurely pace that its immediate predecessor had, though that’s not to say that it doesn’t manage to hit some extraordinary highs regardless.

The film opens with a dynamite exchange between Harry Potter and the goblin Griphook (Warwick Davis), each choosing their words and meaning with caution. It’s a staggering performance from Davis, who has appeared in every film of the series but has until now not gotten the chance to shine in such a way. It’s not long until they’re off on the first of what will prove to be many dangerous encounters, a trip to the guarded vaults of the only bank in all of the Wizarding world, in order to continue the search for Horcruxes (pieces of Lord Voldemort’s soul encased in various bric-a-brac). Where Part I seemed, in some people’s eyes, to move at a snail’s pace, Part II hits the ground running and rarely lets up. This tendency does not do the important plot points enough justice, and the escape from Gringotts Bank is a good example of this. The escape plan comes together too quickly, too neatly, so that despite an intriguing concept involving dragons and demolition, the moment does not manage the constricting feeling and exuberant release that could have easily been employed here.

That’s the large problem that the film faces: it does not have a good grasp on how to wind the tension in such a way that the eventual recoil snaps with power. The fated kiss between Ron and Hermione is sudden and slight; the famous line from Molly Weasley to Bellatrix LeStrange (“Not my daughter, bitch!”) feels oddly listless, and hard to see as hugely meaningful given that LeStrange is almost absent from the film (Helena Bonham Carter has literally one line in the movie); Neville’s rise to stardom and momentous involvement in the destruction of Voldemort could have been recast in a much more thrilling manner (fire rages when other characters take down a Horcrux, but Neville’s moment in the spotlight fizzes out as the camera cuts back to the Boy Who Lived). Most of all, there’s the shrugging way that major characters are killed off during the battle sequence. I know that a lot of this comes directly from J.K. Rowling’s book, and some have argued that addressing the deaths of key players as an afterthought is a more realistic way of portraying a war – that is, people die during warfare without fanfare. But this is a fantasy story. Denying the reader/viewer the satisfaction of seeing beloved characters sent off in a caring manner does not feel like a shot of realism so much as it feels like a missed opportunity. As it stands, the bloody battle for Hogwarts rarely captures the danger and dread in the way that it ought to have.

Those complaints noted, there are also many examples of times where the film reaches beyond the pedal-to-the-metal action. Most memorable of these is an extended, stream-of-conscious flashback which reveals the true depths of the character of Severus Snape (Alan Rickman). Snape has been a central character in the series from the beginning, and this section of the film ties his actions from previous movies – even the Christopher Columbus ones! – together to form a larger picture of the true man behind the dark robes. It is marvelous. An intense moment in the Great Hall of Hogwarts, with Snape threatening violent repercussions for anybody who is hiding their knowledge of the boy wizard’s actions, is a great example of one of the times when the scene builds to a crescendo that does manage to rally the viewer, complete with a touching moment between Professor McGonagall and Potter. We are introduced to Aberforth, brother of the deposed Hogwarts headmaster, for the first time in Part II, yet though he appears in only two scenes there is nonetheless a strong inner struggle and poignant resolution for the character. In just two scenes! And in my very favorite moment of the film, Potter gets some words of wisdom from his mentor during a fever dream. Dumbledore looks at Harry with a soft smile, marvelling, “You wonderful boy. You brave, brave man.”

The students of Hogwarts have grown up and into adults over the course of these eight films, the actors themselves have grown over the years so that to go back to the first few Potter movies now is to see a totally different cast. Both the AVClub and I have referred to the series by comparing it to the Seven Up documentary series, wherein a group of children are interviewed on camera every seven years of their lives. You can see the growth of the children in these documentaries, can think about the choices in their lives that have led them down the roads they’ve ended up on. In a similar fashion, Harry Potter and his friends have taken very specific routes in their lives and it’s lovely to see the adults (Dumbledore, McGonagall, etc.) treat Harry not as a child but instead as an equal, as the man that has he already become.

My disappointment in the rushed treatment of the story is great. There are some who aren’t given enough closure, Draco Malfoy for instance; and the finale – just as it did in the book – hinges on a banal and perplexing code of magical rules which feels like an awful stretch to wrap around the plot. My frustration, though, does not discount those moments of ecstatic excellence which manage to surface again and again. Harry Potter and the Deathly Hallows: Part II is hardly the best that the series has had to offer, but it is a closing which maintains the dignity of the franchise to the very end.

It even makes that awful epilogue work, which has got to be some kind of miracle.

Leave a Reply to INA