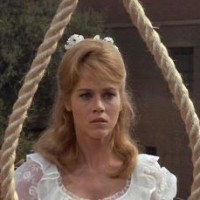 I just started a game on my new website wherein I review a different movie for each letter of the alphabet – one per week – and I’ve been taking suggestions from my legions of loyal readers. It’s a fun gimmick, and it’s a way for me to force myself into watching movies that I maybe wouldn’t have thought to watch on my own. ‘Twas my mother what suggested Cat Ballou, but it was the Flixter synopsis that sold me on it: “A young woman returning to her Wyoming town finds her father murdered because he refused to sell his ranch. To enact revenge she enlists the help of a sharpshooting gunslinger.” Hmm… sounds a lot like True Grit, both versions of which I very recently viewed. With the idea of comparing and contrasting the three films in mind, I headed out in the beginning stages of a blizzard and rented the 1965 Western spoof.

Of course, I didn’t know it was a spoof before watching. And, in fact, I’m not so sure that it’s such a spoof now. There are moments of humor, yes, but I’m not sure that’s enough for spoof-hood. Perhaps if I were more familiar with the genre, I would be able to see where the movie goes above and beyond the Western tropes. In my eyes, though, it seemed sincere even if it had distinct elements of humor. Maybe the reason for that is that the humor seemed so muted, so soft that it was easy to forget that the movie is mostly a comedy. Thinking of it now, of course, there are plenty of things to point out – the silver-nosed gunman, the rancher who spoke Yiddish to his Sioux hired hand (because a Senator told him that Native Americans are G-d’s Chosen People), the drunken outlaw who drinks whiskey like Popeye eats spinach, and so on. It’s too bad that these bits of whimsy are more funny in concept than they are in execution.

So I took the film kind of seriously, which is an equal mistake. The ease with which our heroine Catherine swings from a dainty damsel to a ruthless outlaw bent on vengeance comes too quick, after a long and elaborate set-up. Although the highlight of the film is Lee Marvin as famed gunslinger Kid Sheleen (in an Oscar-winning performance), the best moments come before his arrival – in the awkward group formed by Cat, her father, his farmhand Jackson, and two bumbling crooks. One of my favorite scenes (and again, one funnier in concept than execution) involves the characters all taking part in a complicated square dance while trying to speak with one another. Beyond that, though, the movie remains listless. We’re introduced to Cat while she’s waiting in a jail cell to be carted off to the gallows on charges of murder, but the actual act which leads to her incarceration feels like an afterthought. Similarly, a big deal is made about the silver-nosed assassin, but his exit from the film is off-screen and unsatisfying.

Since I was taking the movie a little more seriously, I noted a running theme about the death of the Western. Sheleen and many of his pals in the outlaw town of Hole-in-the-Wall, Wyoming, are over the hill and tired. They don’t court trouble because as long as they don’t ask for it, then the law will mostly leave them alone. The most sincere moment in the film comes when Cat realizes how things have changed. “We used to whisper your name as kids,” she tells the old folks, “scared to say them out loud.” But now, they’re cowards and drunks. They don’t have that true grit that sets the best of ’em apart. Maybe this running theme is just meant to set Cat apart, to exhibit the fact that she is a genuine gunslinger of the classic persuasion. I was thinking that it cut a little deeper than that, some commentary on the world at large. After all, Cat also matter-of-factly asserts, “Why, if people didn’t try something new, there’d be hardly any progress at all.” The people in this outlaw town have grown sedate, complacent, and they’ve got stuck where they are.

There are definitely some great moments, don’t get me wrong. Sheleen’s training montage is delightful, the opening train sequence works, and I loved the weird group-think between Jackson and the two outlaws from the train. Plus, who can forget that classic image of a horse leaning cross-legged against the wall of a building?

One Response to “Cat Ballou”

Leave a Reply to Ina King