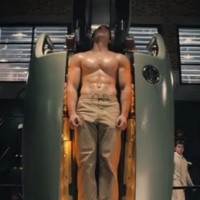 When I told an acquaintance that I had recently seen the newest in the pre-Avengers blockbuster series, the first question to be asked was, “Is it better than Thor?” It’s an interesting question, and one which belies a greater mood surrounding these films: they are interchangeable. For the record, I do think that Captain America was better than Thor, or perhaps just about the same in terms of quality, and this comparison was actually one that I came to myself as I was leaving the theater. I guess you could say that since they’re both 2011 summer blockbusters, the parallel begins there. But nobody is comparing Captain America to Transformers 3 – at least, not that I’m aware of. So the only other connection is the ultimate combo film(s) that each characters’ solo effort is building toward, i.e. these are seen as spin-offs of a larger future project. The concept of a spin-off does not automatically engender comparison, though: it would be insane to pit “Cheers” against “Frasier”, as an example. So why the knee-jerk reaction for the Captain? The two movies have done little to differentiate themselves from one another; lightweight super-hero origin stories, they reach for nothing. Actually, I take that back. When I went to see Thor, the guy at the ticket counter told me, “If you stay when the movie’s over, there’s a scene after the credits.” So these movies aren’t reaching for nothing, they’re just biding time until the scene after the credits. Captain America can’t even wait – it places its after-credits scene within the movie’s run-time!

With that said, I described Captain America to said acquaintance as “thoroughly okay”, and that’s a judgment I think I can feel comfortable standing by. There are some glaring problems in pacing, and a perfunctory romantic relationship which is executed with such sloppiness that it’s almost as if the producers threw up their hands and declared defeat before the script was finished. But aside from these two major problems, the rest of the film builds slowly toward the growth of the weakling Steve Rogers into the super-man Captain we all know and love. There was a brief time when I thought that the trailers selling the film had been falsified, an idea which excited me about the film but depressed me as I considered that movie trailers might begin to intentionally mislead audiences into suggesting that major events happened but which ultimately do not.

What I mean is that for a majority of the picture, Steve Rogers either is not Captain America, is not utilizing his new-found power, or at least is not a super-hero. Through most of the film, Rogers does not have a glistening blue suit or a super-metal shield. He doesn’t run into warehouses full of baddies with guns a-blazin’ and face off against Nazis who remove their skin and become aliens or devils or something. For a lot of the film’s runtime, he’s just a guy. When he gets infused with super-man potion and beefs up to become Captain America, though he inherits the title, he remains largely just a man. Sure he can run faster, jump farther, take a beating and keep on coming… but for the most part, the action is more contained. During one of the largest action set-pieces, Rogers has a pilot’s jacket on covering that trademark logo. I am reminded of a quote from director Collin Buchanan, who wrote recently praising “the first part of Harry Potter and the Deathly Hallows, which is more art film than summer blockbuster.” I deluded myself into thinking that Captain America had the chance to follow in those footsteps, to be more art film than summer blockbuster (though admittedly, only nominally more), but the film keeps running long after it seems that it would be safe to end, completely losing all of the goodwill that was garnered in its first two-thirds by becoming all of the glitzy, commercialized, hack-action drivel that the trailers promised.

Not that glitzy hack-action isn’t fun – I’ve seen all three Transformers movies in the theater, thankyouverymuch – but it’s especially disappointing when you’ve given yourself the hope that the film you’re watching might be reaching to become something more. The bad guys are all bad, the good guys are all good, there is no gray area and no chance for any sort of subtlety or thought. So although there’s something interesting about Dr. Abraham Erskine (Stanley Tucci!) choosing the frail Rogers to be his test-subject for the super-man serum, based on the fact that he has more inner strength than most of the other soldiers in the U.S. Army who rely primarily on their brute force, nothing is done with that idea. Captain America ultimately succeeds, not because he is smarter or more compassionate, but because he can kick some ass. The movie wants to look important, just as the villain Red Skull accuses the Captain of wishing to see their battle as one of world nations when in fact it is a little more than a comic-book  joke gone awry. I think it’s telling that Evans has been quoted saying, “I think the story of Steve Rogers is great. He’s a great guy. Even if it was just a script about anybody, I would probably want to do it. It wasn’t necessarily about the comic itself. He’s a great character to play; he just happens to be a comic book character.” Yet IMDB Trivia notes that Evans turned the role down three times before finally accepting.

Captain America is mindless fun, but it’s sincerely disappointing that the film doesn’t require you to have a mind. The lead actor feigns commitment to the role, but declined it repeatedly before agreeing to take the part. In a similar fashion, the movie itself feigns commitment to “the little guy”, to a lost sense of romanticism, patriotism, and pride that existed during that idyllic time, the roaring ’40s. But in the end, it puts Steve into a listless romantic subplot with a fellow agent that feels tacked on at best and frankly insulting at worst. In the end, it has the Captain and Red Skull facing off in a grand fashion over half-explained plans to destroy the world. In the end, it doesn’t do much but be acceptable. I get this awful feeling that that is all the movie wants to be; just acceptable enough to get you in the theater seat, just acceptable enough to get you back for the next one. How much longer will we be willing to accept just acceptable?

One Response to “Captain America”

Leave a Reply to Josh Glasgow