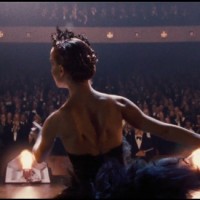 For my money, Black Swan is director Darren Aronofsky’s most consistent and enjoyable film. I had reservations at first, but the movie quickly won me over and the more time I spend thinking about it, the more I appreciate the craft with which Aronofsky constructed the movie. It lacks the heart of The Wrestler (or even The Fountain), but as far as pure theatrics go, it’s a great treat.

The movie follows a ballet dancer named Nina (Portman) who has worked tirelessly to get to the top. The company’s star is forced to resign and Nina gets her chance to claim her rightful(?) place in the spotlight, but there are multiple things weighing her down. There’s the whispered rumors that she’s been sleeping with the ballet company’s director, which is why she was offered the lead role in their new production of ‘Swan Lake’. Then there’s the vaguely creepy Lilly (Kunis) who is almost suspiciously nice. There’s Nina’s overbearing mother, who treats her like she is still a child. And then, of course, there is Nina’s psychotic hallucinations, where finding mysterious scratch marks on her shoulder blade and peeling the skin off of her hands is just the beginning of the story.

I didn’t realize how much of a horror film this was going to be. There are moments where CGI is used to get the effect, but a lot of the curling tension is a result of lighting and camerawork. The apartment that Nina shares with her mother is much more frightening than it has any right to be, and it is entirely because of the fact that the lights are dim or off most of the time and the camera stays close behind the actress as she moves through the set. I was worried at first that the somewhat grainy hand-held camera style of The Wrestler was a bad choice to re-use for this film, but I was convinced. The freedom of movement granted by the film style makes the action seem more urgent and puts the audience in the moment.

Early in the film, the ballet director (Cassel) announces that they will be opening their new season with ‘Swan Lake’, but he heads off criticism by admitting early: “I know, it’s been done to death.” However, he claims that they’re going to do it in a way that has not been done before, by stripping it down to its essential, visceral elements. It’s kind of a cute way for the screenwriters and director to make a statement about the film as a whole. The theme of the film is quickly identifiable and has, indeed, been done to death: the duality of man. Black Swan does take this tired thematic device and skew it in a different way. We’ve seen enough Dr. Jekyll and Mr. Hyde, where one represents unwavering goodness and the other unstoppable evil. But what if Jekyll and Hyde were not so divergent? Or what if there were things to like about the monster? Where the symbolism of black/white and dark/light could come across as too simplistic, the sharp ideas beneath go a long way toward saving it.

I guess I still don’t understand why Nina’s sexuality needed to be such a large part of her story, other than to be titillating. I don’t mean to look a gift horse in the mouth, but the story had already set up the dichotomy between Nina and Lilly in their separate ballet styles – measured and precise versus loose and inventive – that to go further into “Nina is prudish and unreceptive to lesbian advances” seems superfluous.

That minor quibble aside, I saw nine films at the 2010 Kansas International Film Festival, and this one was definitely my favorite. It’s a strong entry from a director who has had a few misses and has a lead who can handle the material in Natalie Portman. So yeah, Black Swan is pretty excellent.