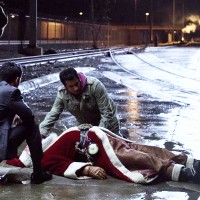 In the third installment of a seemingly never-ending series, stoner buddies Harold and Kumar are back – this time not to get miniature hamburgers, but to find the perfect Christmas tree. By this time around, even Neil Patrick Harris in his requisite cameo breaks character to tell the duo, “See you in the fourth one.” Yes, it’s more of the same for Harold and Kumar as they race against the clock and certain death at the hands of the mafia in an attempt to make it a perfect Christmas for Harold’s wife’s father, played by Danny Trejo. With but a handful of inspired shenanigans and an over-abundance of gimmicky 3-D effects, the film works but it’s rusted and squeaky. The madcap adventures of the two friends no longer have the twisted comedic sensibility of a frat-house version of Scorsese’s After Hours; instead, it cycles through clunky subplots while developing a rough theme about the power of love. By “developing”, I mean that it’s just thrown in any old place in the script.

Harold (John Cho) and Kumar (Kal Penn) have been living apart for years, so much that they have different lives entirely. When a mysterious package appears at Kumar’s apartment addressed to his old friend, the two reunite. The package contains a large joint, and in a series of accidents the family Christmas tree catches on fire and has to be thrown through the window to prevent burning the house down. Since the father-in-law spent eight years growing the tree and is powerfully prejudiced when it comes to Koreans, a Christmas Eve race through New York City is required to find a suitable replacement. This involves a party full of pre-teens who challenge the duo to a beer pong tournament, a sociopathic mob boss who mistakenly believes that Harold and Kumar have deflowered his virgin daughter, an imagined desecration of a church, and an unnerving drug trip that leaves our heroes clinging for dear life to a sapling in Central Park, under the impression that they have become claymation replicas of themselves.

So the movie is chockablock with action. Two questions remain: 1) is the action pertinent to the story? 2) Is it funny?

Often, the situations that arise do not feel natural or important to the overall plot. Of course the friends usually find themselves in bizarre situations, and even in the previous films this often means meeting an assortment of off-the-wall characters for one-off scenes. Some of that is retained here, as when a couple of Christmas tree salesmen take turns playing the “scary black guy”. It’s a quick and clever way of poking fun at racial stereotypes. Later in the film, though, Harold and Kumar’s friends find themselves trapped in the closet of mob boss Sergie Katsov (Elias Koteas) in a one-joke concept that is stretched out over the course of the film. They struggle to contain the thrashing of one of the men’s daughter, a toddler who happens to be high on cocaine (don’t ask). Santa Claus himself even appears in the film, for no particular reason except as a convenient way of getting the guys to a new locale. These half-baked and tenuous connections make for a lousy adventure. Instead of things spinning wildly out of their control, Harold and Kumar just keep wandering willingly into new troubles.

As the comedy goes, while there are some parts that made this curmudgeon chuckle, those moments are over-shadowed by the many misses. Our introduction to Harold has him dodging eggs thrown by Occupy Wall Street protestors while his assistant takes the full brunt of the assault like a volley of machine gun fire. The audience was cracking up at this scene, and the laughter was similarly strong when Harold later accidentally uses swear words in Spanish while talking to his wife’s grandmother. These sorts of jokes feel cheap even by stoner comedy standards, so much that even when there are comedic elements which are more finely tuned – a waffle-making robot with a murderous hatred of people who prefer pancakes, for instance – they’re hard to appreciate in a sea of “guy opening a bag of chips while he’s trying to be really quiet” and “Asians all look the same” jokes. When done deftly, the hyper-heterosexuality of Neil Patrick Harris in these films can be intensely funny; when handled poorly, it just comes across as creepy. I’ll let you guess which side of the spectrum NPH falls in HK3.

What the movie lacks in engaging comedy, it makes up for in over-the-top 3D. From the opening scenes, Kumar and a mall Santa (Patton Oswalt) are lighting up joints and blowing smoke into the audience. It only gets more extreme from there, with the OWS eggs shooting at the screen, people pointing out into the audience, a wreath or a hat being flung outward, glass shards flying with the burning Christmas tree, the bloody teeth of priests zooming into the viewer’s face. The list goes on. Practically anything that can be thrown from the screen into the audience is thrown, and in one particularly brilliant scene the characters on-screen watch a 3D television, reaching out to touch the images flying toward them. The way the movie uses the depth of field to allow the effect to work in the opposite direction is great, and it’s unfortunate that this sudden turn especially will not be as effective once the film is transferred to two dimensions for the video release. But mostly the technology is used as a stunt only, with many characters referencing the new dimension directly.

With that said, A Very Harold & Kumar Christmas is a movie that has to be seen in the theater if it is seen at all. The story does not reach in any new or exciting places and the humor is often dulled. There’s no real urgency to the events and the “sweet” conclusion is totally unearned. But it’s upbeat, it’s energetic even if it’s running in circles. It’s not good, but it’s fun to watch. If you just want to see pretty pictures and characters you’re familiar with, you could definitely do worse than this. See it or don’t!

Leave a Reply to BILL